You are here: Home / News / The fate of these metals is expected to turn around when electric vehicles are favored

According to data provided by Schmidt, the market research organization, the sales volume of electric vehicles in Western Europe, the world's second-largest automobile market, has increased by 37% since last year, reaching 142000.

According to Schmidt's preliminary data, in April, the sales of electric vehicles accounted for 6.7% of the total sales of cars in continental Europe. In countries such as Norway, 7 of the 10 new cars sold are electric (mainly due to the large incentives - you can enjoy a half-price discount even when you take a ferry). Until recently, you could park anywhere for free. In the UK, electric cars account for a third of sales. 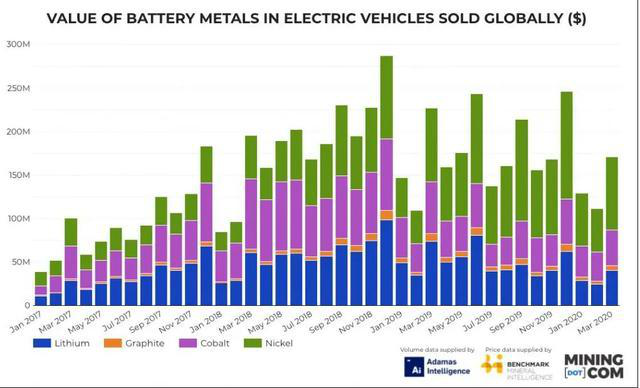 But recently things have been a bit bad.

Total vehicle sales in Europe (excluding the UK) fell 80% last month, while the decline in EU electric vehicle sales was relatively flat at 30%. 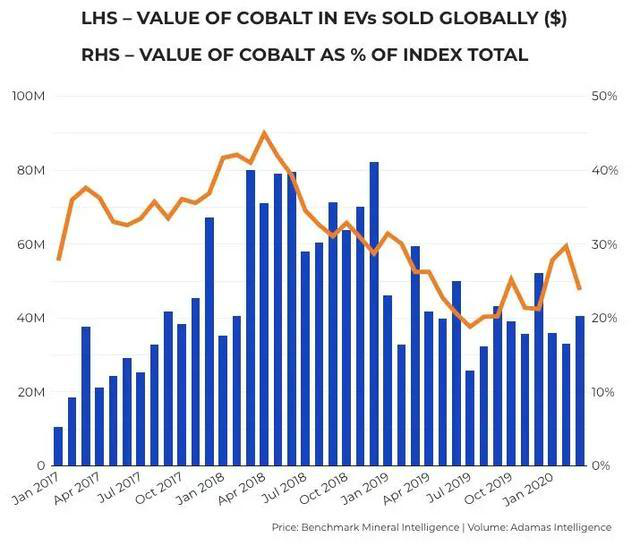 In April, car sales in China also fell by nearly a third. Compared with 2019, the sales of electric vehicles dropped by 80% (although China has successfully controlled the epidemic, luxury electric vehicle manufacturer Tesla has closed its new factory in Shanghai without any reason, resulting in a 64% drop in the sales of mass-market model 3 in China).

Elon Musk, Tesla's boss, may have broken the law (referring to his May 1 tweet that he thought the company's share price was "too high.". The comments not only caused Tesla's share price to plummet immediately, but also may have violated an agreement he reached with the Securities and Exchange Commission last year and submitted to the federal court in Manhattan, but the company's mass-market Model 3 is still looking for new buyers and has made gains. In Europe, the sales of the mass-market Model 3 once topped the list. With the delivery of the first ys model, the pioneer of electric vehicles seems to be much better than its competitor ice this year.

But the news upstream is not so optimistic.

According to the data provided by benchmark mineral intelligence, the pricing agency of battery supply chain and giant workshop tracking agency, the market is deteriorating: the price of raw materials tracked by the metal index of electric vehicle battery in mining network fell in an all-round way: in March, the price of lithium fell 40% year-on-year, the price of cobalt fell 15%, the price of nickel fell 2.4%, and the price of graphite fell 26.2%.

But data from Adamas, another mining think-tank, tracking registered electric and hybrid vehicles (and metals in batteries) around the world, showed that lithium (down only in the first quarter of the year 2.7% ）, cobalt (year-on-year growth 0.5% ）And graphite (down year on year 1.3% ）Overall sales are still good. Nickel for batteries has soared in electric vehicles that are part of the global car ownership program 10.4% 。

Overall, in the first quarter of this year, the metal value of electric vehicle batteries sold worldwide was four-point one US $billion, down from the record for the same period in 2019 14.7% 。

European car manufacturers favor nickel cobalt manganese cathode batteries (NCM), which have a larger energy density and a wider range, and together with Tesla's nickel cobalt aluminum (NCA) technology, these batteries account for more than 90% of passenger car batteries.

Although the price of cobalt fell further in March, compared with the same period last year, the cobalt sub-index of electric vehicles in the first quarter of 2020 only fell by a little more than 20%.

At this time last year, the price of cobalt entering the battery supply chain was between $50000 per ton, but has since fallen to a low of $30000.

When ncm111 (nickel, cobalt, magnesium, etc.) is eliminated in the latest model, cobalt is proved to be the viscous component of the cathode. But despite the price drop, cobalt is still the most expensive raw material so far, so automobile manufacturers should try to save cobalt in cathode.

At present, the only electric car competing with Tesla in luxury is Audi's e-Tron. Alla Kolesnikova, head of data and analysis at the Adamas think tank, explained that the 55 Quattro has a battery capacity of 95-kilowatt hours and that the NCM622 uses more than three times as much cobalt as the Tesla Model 3 battery in the United States.

In turn, the 75 kilowatt-hours all-wheel-drive model 3 (AWD) sold in the United States is equipped with NCA batteries (Tesla claims that its batteries contain less than one part of cobalt and about nine parts of nickel) and the 56 kilowatt-hour ncm811 version made in China, with 20-30% more nickel per unit of battery capacity than Audi.

According to Adamas battery capacity tracking, nickel rich cathode batteries such as ncm811 currently have a global market share of 9%, compared with less than 2% a year ago. In March this year, ncm811 accounted for nearly one-third of the total capacity of batteries deployed and produced in China.

This is due to a 77% increase in nickel consumption in the production of automotive batteries deployed in March, reaching more than 6000 tons, thus making up for the impact of a 30% drop in nickel sulfate prices from a peak of $4400 per ton in September last year.

In mid-2019, China suddenly changed the incentive mechanism for the electric vehicle market, but then the subsidy mechanism set by the Chinese government made the manufacturers of new energy vehicles feel reassured. Some provinces have made their own plans for the development of new energy vehicles, and the automobile manufacturing industry is bound to be the engine to stimulate China's economic recovery.

Although before the epidemic spread, people did not look forward to the market in 2020, or even think it would be a bleak year. But now it doesn't look that bad. In the United States and Europe, electric vehicles are likely to escape the worst of the overall downturn in the automobile industry. European green car incentives are still generous, and a cash for clunkers program for electric vehicles is likely to come soon.

However, the price of raw materials is bound to be a hurdle to be crossed.

Although the new crown outbreak disrupted production in Chile, Argentina, and Australia, the main producers, it had little effect on alleviating global oversupply, and the price of lithium seemed to be the most vulnerable.

At the same time, based on the impact assessment of the epidemic, the benchmark company lowered its expectation of cobalt demand in 2020 8.6%, to 121000 tons, while by the end of 2022, the market surplus of cobalt had declined, but by a small margin.

Graphite demand forecast down 10.2%, to seventy-four point nine Million tons, the market shortage will appear in 2023, and it is expected that there will be insufficient supply next year.

Although the production of nickel suitable for the battery market in Indonesia is further delayed, the demand for nickel sulfate is expected to reach sixteen point nine Million tons, the market will remain surplus by 2023.

HQed in London will increase its expected electric vehicle penetration rate this year from 3.1% Down to 2.7% 。 That is to say, the demand for nickel for automobile batteries in 2020 will be 550000 sets less than previously expected. 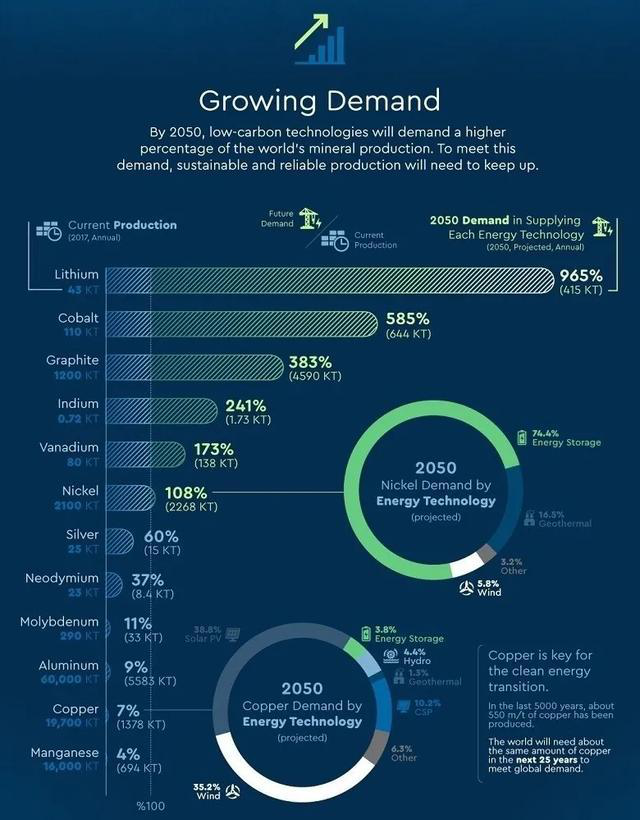 A few days ago, the world bank reported that in order to meet the growing demand for clean energy technology, by 2050, the production of metals for electric vehicle batteries, such as graphite, lithium and cobalt, will increase by nearly 500%.

According to the world bank, more than 3 billion tons of minerals and metals will be needed to deploy wind, solar and geothermal energy, as well as energy reserves for the transition to a low-carbon economy.

Many of the key minerals used to make electric vehicle batteries are distributed in developing countries. The world bank's goal is to help these countries mine these minerals in a sustainable way to avoid serious ecological damage.

The exploitation of these key minerals for the manufacture of electric vehicle batteries is seen as the only way to achieve the objectives of the Paris Agreement. The agreement seeks to keep global warming within two degrees Celsius.

The action report on minerals for climate calls for a 50% reduction in global greenhouse gas carbon emissions by 2030 and a zero-emission by 2050.

This information has brought advantages and broad prospects for the market of nickel, cobalt, lithium, and other metals for electric vehicle batteries.